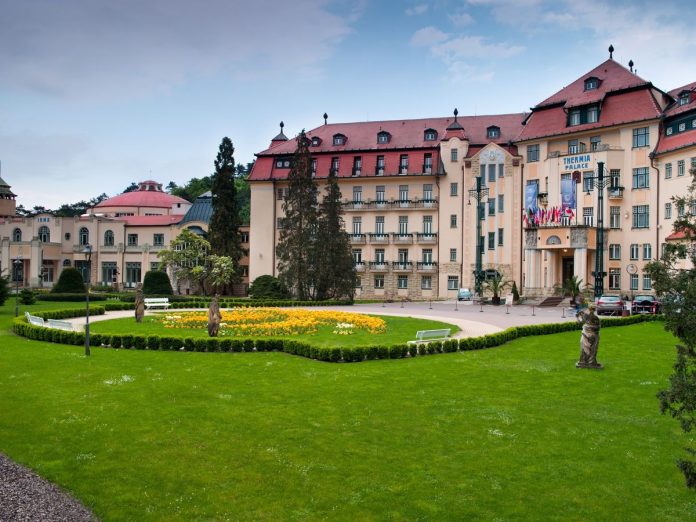 Pieštany is located in the western part of Slovakia, 80 km from Bratislava and 160 km from Vienna. It lies on the spa island between two branches of the Váh river, at the site of several hot springs with temperatures of 67–69 °C (153–156 °F). The water originates in a tectonic break at 2,000 metres (6,600 feet) depth.

The first important owners of the spa were the Erdödy family. Erdödys had the first spa house built after the Napoleonic wars in 1822. It still stands and is referred to as the Old Spa or Napoleons Bath. However, it was the Winter family that developed the spa to its full prosperity and world fame. Several hotels in the Art Nouveau style were built at the beginning of the 20th century and a few new spa buildings were constructed in the 1960s to 1980s.

Today the spa offers more than 2,400 beds, most of them owned by Ensana and Danubius Hotel group. More than forty thousand patients are treated every year, among them 60% of are foreigners (mostly from Germany, the Czech Republic, Israel, Austria and Arab Countries). The spa specializes in the treatment of chronic rheumatic and arthritic diseases and post-accident lesions of joints and bones.

SPA-CE Experience Workshop and ESPA Annual Congress will be a unique opportunity to visit and experience Pieštany Spa resort!

Organisers are thankful to Slovakia Travel for the support!

Find out more at https://slovakia.travel/en/spa-piestany

Results of the survey about the future of spa, wellness and health tourism

Quick links
Organiser
In partnership with